“The more we worry, the more it appears we care.”[i]

Most of us have fallen into the “Worry means I love you” trap at one time or another, but it’s time to climb out of that pit. Janice Wise, author of that quote, continues it by writing, “Yet once anxiety has established a stronghold in our lives, it robs us of faith, turning true compassion into a self-preserving concern. We become ‘worried witnesses,’ and the world finds little in our anxious behavior to draw them to the One we call Lord.”

In many Christian circles, worry is accepted as normal and natural. No one asks the hard question: Is worry a sin? The Bible says quite clearly, “Do not worry.”

Oh, we have plenty of excuses.

Hebrews 2 tells us Jesus suffered when he was tempted and is therefore able to help us when we are tempted. Isaiah 26 declares that we can remain at peace when we trust in God. I Corinthians 10 promises we will never be tempted beyond what we can bear, and that God will always provide us with a way out.

So what do we do if the sin of worry is ingrained within us? I have a few thoughts. You’ll find them in next week’s post, because this one is long enough already…

[i] Wise, Janice. Walk out of Worry: Choosing God’s Path to Peace. Gospel Light, 1999, p. 5. This entire essay is inspired by that book, still available at www.amazon.com.

One Sunday, when Dennis Swanberg was a kid of six or seven, he went to a church service where the pastor asked, dramatically, “What shall we do with sin?” Too young to understand that this was a rhetorical question, Dennis looked around, thinking, “Why isn’t anyone answering him?” When no one spoke up, Dennis stood up, shrugged, and mouthed the words, “We don’t know.”

The preacher didn’t notice the little guy, and later in the sermon, he asked again, “What shall we do with sin?” Dennis felt so sorry for the preacher that he stood up and motioned silently, “We don’t know. I don’t know. You don’t know. Only God knows. Don’t ask us, ask him.”

Before long, the preacher asked the question one last time, seriously, slowly and dramatically, “What shall we do with sin?”

Little Dennis couldn’t take it anymore. He jumped to his feet and climbed up on the pew. Inspired by a phrase made famous by Barney Fife of the old Andy Griffith Show, he yelled, “Nip it in the bud! You gotta nip it in the bud!”[1]

You know what? Little Dennis was right. I’ve lived long enough to learn the hard way that sin

The “bud” stage is when it’s just a thought. We need to stop sin right there before it can move to the imagination stage, where we roll the idea over in our minds, thinking what it would be like. (Probably wondering if we would get caught, or asking ourselves if it’s really wrong, or convincing ourselves that lots of other people do it.) If we imagine a particular sin long enough, we’ll probably do it. If we continue in that sin, it will become a stronghold in our lives, a place in us that we guard. We’ll fortify it against God’s intrusion.

The Bible tells us what do with sin. Here are the Four R’s of nipping it in the bud.

Nip it in the bud!

photo by Katherine Volkovski via Unsplash.com

I can still remember the evening Steve put a diamond ring on my finger. We were taking one of our many walks on Hollywood Beach. After his proposal, we stood under a streetlight so I could see just how much the stone sparkled. I spent plenty of time over the next several months admiring that ring—watching how it broke streams of sunlight into prismatic colors, dunking it almost weekly into a plastic jar of cleaning fluid and using a tiny brush to scrub it.

Last week, I looked down at my ring and noticed it was surprisingly dull. The top surface looked clean and shiny, but sparkling? No, not really. Upon closer inspection, I discovered an unidentifiable gray-white scum clogging the spaces between the prongs. Ewww! No light could get through to the stone. I don’t have one of those little jars of cleaning fluid anymore, but toothpaste and a brush worked rather well. My ring is sparkling once again, and I’m determined to be more mindful of caring for it so I can fully enjoy its beauty.

By now you’ve probably guessed what this week’s question will be.

How’s your sparkle? Do you look clean and shiny on top while collecting gunk below?

Hebrews 12:1 tells us to “throw off everything that hinders and the sin that so easily entangles” us. The writer there is using the analogy of a race, but a ring works just as well.

What keeps us from glorifying God and enjoying him to the fullest?

Chances are something just popped into your mind. Maybe it’s a sin. Maybe it’s just a bad habit that slows you down or dulls your sparkle. I could make a list of possibilities for you to consider, but that would just be the gunk that threatens my sparkle. Yours might be different. No matter what it is, you are not stuck with it!

It’s worth it. I promise!

I keep a list of quotes that strike me as challenging and true. When the list lengthens, it’s time for me to share them with you. Here are my favorites from the past few months, credited wherever possible.

“Often the work of the Lord itself may tempt us away from communion with Him. A full schedule of preaching, counseling, and travel can erode the strength of the mightiest servant of the Lord. Public prayer will never make up for closet communion.”

“The Christian should never worry about tomorrow or give sparingly because of a possible future need. Only the present moment is ours to serve the Lord and tomorrow may never come.“–Both by George Muller in The Autobiography of George Muller. Whitaker House, 1985, p. 46 and 207.

“God’s plan isn’t something he just threw together.” –Paul Washer in a sermon entitled “Walking with God” available on sermonaudio.com.

“Sin is a process. You arrive there on a journey of small decisions gone wrong…Satan’s goal through sin isn’t to draw you to himself, but to draw you away from God…Christianity is not about avoiding sin, it’s about chasing after Jesus.” –Matt Werner in a sermon at Bannockburn Baptist Church.

“God’s faithfulness in the past needs to motivate our worship in the future.”–Ty VanHorn in a sermon at NorthWest Bible Church

“Following Jesus is more than just agreeing with the tenets of the gospel, it is living and experiencing God living in you.”

“God calls all of us to be Jesus where we’re at.”

“What you worry about most is what you trust God with least.”

I love this story about “a little bit of sin.” Two teenagers wanted to see the latest movie, one their father was quite sure was inappropriate.

“There’s only a little bad language in it,” they pleaded. “There’s almost no violence, and, while they talk about sex, you never see any on screen.” The father was adamant. The teens were upset. Eyes were rolling. Grumbles were rumbling.

But this was a very creative dad who loved his children and wanted to make a point. He headed to the kitchen to bake a batch of brownies. The house was filled with the tantalizing aroma of the coming chocolate treat. The teens soon made their way to the kitchen, begging for brownies.

“Help yourself!” the father said, “But before you dig in, you should know that I added just a little bit of dog poop to the recipe. There’s not much. You won’t be able to see it. I’m pretty sure you won’t even taste it. It probably won’t hurt you a bit.  So go ahead. Have all you’d like.”[1]

They got the point. That’s the way sin is in our lives. It doesn’t matter how much or how little, it’s still there.

First John 1:10 says, “If we claim we have not sinned, we make him (God) out to be a liar and his word is not in us.” Fine! But how about those of us who have really messed up? Some of us have had this thought, “I’ve done so much wrong, really evil stuff. I know I’m beyond redemption, beyond forgiveness.” Not true! Those who are forgiven much love him all the more. None of us are beyond His forgiveness. We’re like the lost coin in the parable that Jesus told. Let me recount it for you.

“Suppose a woman has ten silver coins and loses one. Doesn’t she light a lamp, sweep the house and carefully search until she finds it? And when she finds it, she calls her friends and neighbors together and says, ‘Rejoice with me; I have found my lost coin.’ In the same way, I tell you, there is rejoicing in the presence of the angels of God over one sinner who repents” (Luke 15: 8-10 NIV).

The lost coin in this scripture was a silver drachma. It was probably only about the size of a dime, but it was worth about a day’s wages. It was worth the search! And we’re worth the search. If we’re feeling lost, either eternally or temporarily, we can be sure that God desires to find us and to help us find him. He searches for us and joyfully receives us.

Next time you see a dime, let it remind you to cry out, “Here am I, Lord. You’ve found me.”

Photo by Michelle Tsang via unsplash.com

[1] http://www.snopes.com/glurge/brownies.asp , accessed 6/2/2015 reported that, “Our earliest sighting of this item comes from a August 2001 web site posting, and it has since appeared in at least one gook. However, even in its earliest incarnation the author was not identified, which makes it difficult to determine whether the story is a true account or a work of fiction.”  This author found it uncredited on several websites. 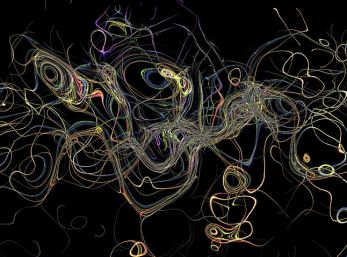 The cord of my kitchen blind is twisted and tangled. I used to think a family member was doing this to mess with me. Not so. It just happens, little by little. If I don’t keep up, untwisting it day by day, the tangle becomes a snarl, a complicated mess that’s hard to set straight. Sin is that way. Have you noticed?

Hebrews 12 has a lot to say about keeping sin from becoming a snarl in our lives. Look at verse 1, “Let us throw off everything that hinders and the sin that so easily entangles. And let us run with perseverance the race marked out for us.” Perseverance is the straightening process that must be done day by day before our tangles become snarls. We may not all be hindered by the same temptations, but we all have a lot of “throwing off” to do. We can do it, though, because we have the power of the Holy Spirit within us. Hebrews 12 is a rich chapter, full of pointers on how to live well. Here’s an abbreviated version of the rest of the chapter:

And that’s plenty to chew on for this week!

May God let his Word sink deep into your soul!

I’d love to have your comments. Just click on the balloon on the top right corner of this page.