They say it’s a woman’s prerogative to change her mind. But have you ever actually tried to change your mind—in a deeper sense, as in trying to change how your mind works, what your default settings are, and how your thoughts affect your actions?

Our church has been covering the spiritual aspects of that question lately, and here are some of the lessons I’ve learned.

Catchy? Sure, but also a good warning to watch our input, to make sure the sources feeding our minds are controlled and the input we choose matches the output we want. We can begin to meet that challenge by:

If this already feels impossible to you, remember, the Bible says that we are to:

God doesn’t ask us to do anything he isn’t ready to empower us to do.

There’s an old and powerful book called The Practice of the Presence of God. The title itself is lesson enough today. We have to practice keeping our minds on Christ, staying aware of his presence. So much of our thought life is based on habits we’ve built—or practiced—over time. So what, exactly are we practicing? Here are a few clear directions. I challenge you to memorize one of these verses this week. ‘Hope you’ll let me know which one you choose.

*photo by johnhain via pixabay.com

Christmas is in our rear-view mirror right now, with Easter still a good way off. Nevertheless, every day is a good day to think about the life of Christ. (And the photo is not an error. Just read to the end!)

Here is a man who was born in an obscure village, the child of a peasant woman. He grew up in another village. He worked in a carpenter shop until He was thirty. Then for three years He was an itinerant preacher.

He never owned a home. He never wrote a book. He never held an office. He never had a family. He never went to college. He never traveled two hundred miles from the place He was born. He never did one of the things that usually accompany greatness. He had no credentials but Himself…

While still a young man, the tide of popular opinion turned against him. His friends ran away. One of them denied Him. He was turned over to His enemies. He went through the mockery of a trial. He was nailed upon a cross between two thieves. While He was dying His executioners gambled for the only piece of property He had on earth – His coat. When He was dead, He was laid in a borrowed grave through the pity of a friend.

Nineteen long centuries have come and gone, and today He is a centerpiece of the human race and leader of the column of progress.

I am far within the mark when I say that all the armies that ever marched, all the navies that were ever built; all the parliaments that ever sat and all the kings that ever reigned, put together, have not affected the life of man upon this earth as powerfully as has that one solitary life.

This essay was adapted by Graham Pockett.*  For those ready for an inspirational chuckle, he also wrote this, with apologies to Gene Roddenberry:

Faith, the Final Frontier
These are the voyages of the human race;
whose continuing mission is to trust God in all areas and not waver,
to seek out new insights from His Word,
and to boldly offer Salvation to all who’ll listen

*http://www.anointedlinks.com/m.one_solitary_life.htm from a sermon by Dr. James Allan Francis in “The Real Jesus and Other Sermons” © 1926 by the Judson Press of Philadelphia (pp 123-124 titled “Arise Sir Knight!”). If you are interested, you can read the original version as well.

Many thanks to Graham at http://www.thecockatoo.com/

One Sunday, when Dennis Swanberg was a kid of six or seven, he went to a church service where the pastor asked, dramatically, “What shall we do with sin?” Too young to understand that this was a rhetorical question, Dennis looked around, thinking, “Why isn’t anyone answering him?” When no one spoke up, Dennis stood up, shrugged, and mouthed the words, “We don’t know.”

The preacher didn’t notice the little guy, and later in the sermon, he asked again, “What shall we do with sin?” Dennis felt so sorry for the preacher that he stood up and motioned silently, “We don’t know. I don’t know. You don’t know. Only God knows. Don’t ask us, ask him.”

Before long, the preacher asked the question one last time, seriously, slowly and dramatically, “What shall we do with sin?”

Little Dennis couldn’t take it anymore. He jumped to his feet and climbed up on the pew. Inspired by a phrase made famous by Barney Fife of the old Andy Griffith Show, he yelled, “Nip it in the bud! You gotta nip it in the bud!”[1]

You know what? Little Dennis was right. I’ve lived long enough to learn the hard way that sin

The “bud” stage is when it’s just a thought. We need to stop sin right there before it can move to the imagination stage, where we roll the idea over in our minds, thinking what it would be like. (Probably wondering if we would get caught, or asking ourselves if it’s really wrong, or convincing ourselves that lots of other people do it.) If we imagine a particular sin long enough, we’ll probably do it. If we continue in that sin, it will become a stronghold in our lives, a place in us that we guard. We’ll fortify it against God’s intrusion.

The Bible tells us what do with sin. Here are the Four R’s of nipping it in the bud.

Nip it in the bud!

photo by Katherine Volkovski via Unsplash.com

Not a shadow can rise, not a cloud in the skies,

But His smile quickly drives it away;

Not a doubt or a fear, not a sigh or a tear,

Can remain when we trust and obey.

Trust and obey, for there’s no other way

To be happy in Jesus, but to trust and obey.

With that in mind, I wish you the very happiest of New Years!!! 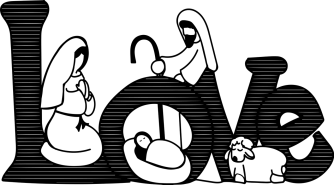 Christ the Savior is born!

May God grant you a delightful celebration of our Savior’s birth!

With Love and Great Joy,

My son-in-law Steve is Greek. His mom, Helen, was a great cook and made wonderful cookies with names I can’t pronounce. Once, when Helen was making cookies with our granddaughter, Elizabeth, they got to the part of the process where the hot buttery cookies needed to be coated with powdered sugar. Helen gave specific instructions, explaining, “You don’t need just a sprinkling of the white stuff on these. You have to put on mounds of sugar.” Her cookies were supposed to be heaped up with powdered sugar, ready to delight those eager to eat them.

The Bible talks about mounding or heaping up—not powdered sugar, of course, but other things that are much more important.

Most of us think of treasure as money or expensive gifts. I don‘t believe that’s what God considers treasure. Take a look at these verses:

“My child, listen to what I say and treasure my commands. Tune your ears to wisdom, and concentrate on understanding. Cry out for insight, and ask for understanding. Search for them as you would for silver; seek them like hidden treasures” (Proverbs 2:1-4 NLT).

“In him (Christ) lie hidden all the treasures of wisdom and knowledge” (Colossians 2:3 NLT).

Isaiah 33:6 (AMP) reminds us that, “the reverent fear and worship of the Lord is our treasure and His.” That’s a wonderful verse. As we stand in awe of God and worship him, we are enriched and so is he. Imagine that! Sometimes we ask, “What can I do for God?” Often we’re only thinking in terms of good works, but this verse suggests that we serve him by worshiping him.

Our greatest treasure, of course, is our salvation through Jesus Christ. You’re going to love this passage from the New Living Translation: “God raised Jesus Christ from the dead. Now we live with great expectation, and we have a priceless inheritance—an inheritance that is kept in heaven for you, pure and undefiled, beyond the reach of change and decay” (1 Peter 1:3b-4 NLT).

When you see a mound—an ant mound, a Mounds candy bar or even a cookie covered in mounds of sugar, think about the mounds of treasure our Lord offers us.

What a treasure—a treasure far more important than any we may acquire on earth!

*Photo from markusspiske on pixabay.com

I’d love to have your comments. Just click on the balloon on the top right corner of this page.